I’m somewhat aware of Russell Brand.  I confuse him with David Tennant sometimes, but I think I could pick him out of a crowd.  I don’t know what he does or why he is well-known, but I’m familiar with him.

I’m somewhat aware of Jordan Peterson as well.  I’m not sure where I first learned about his book 12 Rules for Life, but I know one of the young men at church recently told me he is reading it.

So I was mostly on the same page with the guys at the Speak Life Podcast (whom I greatly like) when they started talking about an interview between Brand and Peterson on a recent episode.  They played a clip from this interview during this episode.  I don’t know the full context of that clip, but I know that in in Brand says this:

“We don’t want a judgmental Jesus.”  That’s what Brand says there.  And I can at least partially understand and sympathize with that sentiment.  If by judgmental you mean someone who will mercilessly savage you because of your mistakes or failings, then, no, I don’t want that Jesus either, and I don’t believe that’s who Jesus was; after all, He “would not break a bruised reef or snuff a smoldering wick” (Matthew 12:20).

But if by judgmental you mean “one who makes judgments” or “one who identifies behaviors as wrong”, then, yes, Jesus was judgmental. Contrary to what Brand says in the seconds before the clips above, Jesus was judgmental even in the Gospels. Here is one example of many in which Jesus not only makes a judgment but makes it to a person’s face:

That is who Jesus was.  That is what Jesus did.  And if we portray Jesus as being anyone else or doing anything less, then we have misrepresented Him.  We have, in fact, created Him in our own image, reshaped Him to fit our own desires rather than accepted Him for who He really was.  s

Writer Anne Lamott gives me this “created in our own image” language.  In one of her books (can’t remember which one off the top of my head), she says this:

And I took that statement to heart.  I understand that I often falsely think Jesus hates everything I hate (or likes everything I do, etc.; that, in other words, Jesus endorses my 21st Century American life and all the assumptions that go with it), and I further understand that if I continue assuming Jesus hates everything I hate even after seeing in the Scriptures that this is not so, then I have created Him (and God as well) in my own image; I have not accepted His true image and am not truly following Him even if I say I am.  So Lamott has truly schooled me here; she has identified and checked an error I consistently make, and because she has done so I have tried (somewhat successfully, I think) to turn away from that error.

By the same token, though, it is equally legitimate to say “You can safely assume you’ve created Jesus in your own image when it turns out He endorses everything you want to do.”  I don’t have a meme for that one, as I just made it up, but I’m certain its correct.  And it seems to me that Brand and the many others who reject the quote-unquote judgmental Jesus are saying that very thing.  They are creating God/Jesus in their own 21st Century American image.  (To be honest and fair, I don’t know that Brand is saying that; it seems to me that Brand is searching for truth and I congratulate him on that; I don’t want to criticize him as he does that, and I especially don’t want to criticize him falsely; but I know many people using that same language are indeed saying that).

A much better and more accurate image of Jesus is that which C.S. Lewis gives us in The Lion, The Witch, and The Wardrobe. When the kids realize Asian (who represents Jesus) is a lion, they are afraid and ask if He is safe. In reply, Mr. Beaver says: 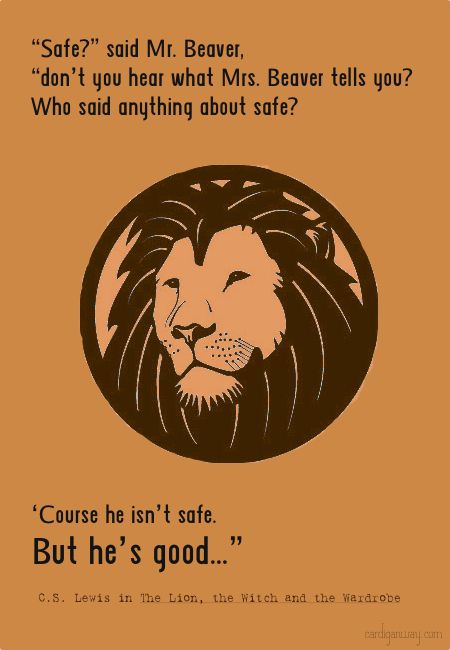 I believe what Lewis meant there is that Jesus is not safe in the sense that He, like a lion, wants to consume you, that He wants all of your life, wants to alter even those secret sins you treasure or depend on. In other words, He does not accept or endorse everything but instead judges everything. At the same time, Lewis tells us, He is good. The changes He wants to make in you are positive changes, even if they don’t seem like it at the time.  The judgments He makes are right judgments which always and ultimately benefit us.

Jesus is judgmental. That’s a fact. And I’m glad He is.  I’m much better for it. You can be, too.