Some guy walked passed me at the department store one day.  He had on a T-shirt which was making some statement about evolution.  The shirt said something about “the ascent of man” and profiles of ancient hominids becoming full-fledged homosapiens.

Now it is possible that this shirt was more comedic than serious.  I couldn’t see either end of the ascent as the man was wearing a jacket which obscured them both.  There was also the name of some school under the profiles.  It could be that either the last or the first profile was something ridiculous (a professor from said school or something; I don’t know) which would have turned the whole thing into a joke.

Serious or not, though, I reacted to it.  As soon as I saw this shirt, I imagined things I could say to this man to debunk evolution.  I started thinking of how I could fight this man, in other worlds, fight him and his evolutionary presuppositions and all he has built on them.

But as soon as I realized I was doing that, I additionally realized I shouldn’t be doing that.  I realized that wasn’t the way of Jesus, whom I call my Lord and on whom I base my behavior.  I realized that Jesus didn’t fight with people, didn’t attack and throw down their worldviews, as much as He moved people into the next step in their walk with God.

The idea of “moving people” like this comes to me via something called “The Engel Scale”.  I don’t know who Engel was, but I learned of this scale during some disciple-making training a couple years ago.  The scale shows that people are not just “all God” or “no God” but are instead at differing levels of closeness to or distance from God.  The scale further shows that success in disciple-making is not necessarily a matter of -10 to +10 but could instead be a matter of moving someone from -7 to -6 or +1 to +2. 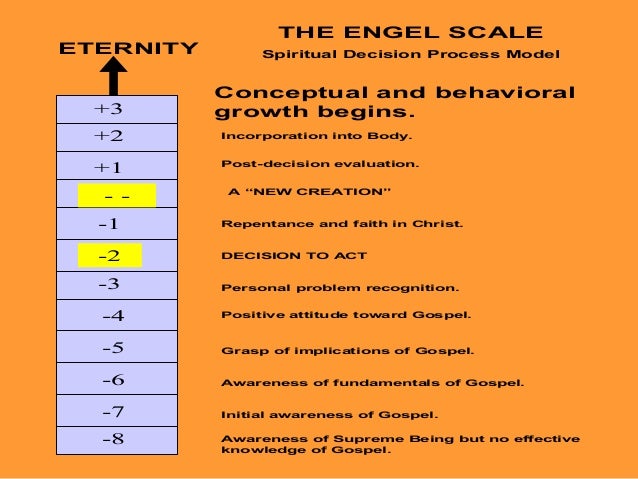 This sounds correct to me.  It also seems a lot like what I see Jesus doing in the Gospels.  If you look at His encounters with tax collectors and religious leaders, with Nicodemus and the woman at the well and the rich young ruler, what you see is not Jesus so much engaging in large scale worldview battles as much as figuring out where they were and helping them to move one step closer to where they needed to be.

I certainly would like to be more like Jesus in this area, would like to do more of what He did or do things more like He did.  I’m not sure how to do that.  But I believe it is the right and better thing to do.  I believe trying to move people to the next right step, giving them what they need despite themselves rather than beating them in an intellectual contest, is far more right and better than what I typically do.

One thought on “The Next Step”