This post is a point from a recent sermon which I thought was A) important and B) open to some elaboration.  I have taken it and elaborated on it here.

A fifth/final way to escape fear/live apart from anxiety is to see that some of the things we fear are not as important as we think they are. These fears aren’t as great as we make them out to be.

For example, I’m afraid of not being a good preacher and I have been for some time.  It was established very early in Bible college that I was a “good preacher”.  I’ve been called that or told I am that more times than I know.  And that was very pleasing to me when I preached my first few sermons at 14 & 15 years old.  Now, though, some thirty years later, it isn’t so great.  Once you get a title like that, you then have to live up to it.  Like the old gunfighter who has to defend his reputation against every young buck who wants to make a name for himself, I have to defend my reputation.

(When I preached this, I said I thought there was some movie about an old gunfighter defending his reputation.  Somebody shouted out The Shootist.  I’ve never seen it, so I don’t know if that’s it or not.  I do know that I’ve seen this idea in a slightly comic form in this Far Side cartoon.) 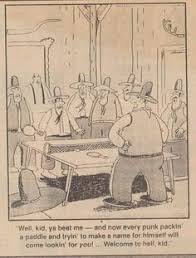 Let me give you another example of a fear I have which isn’t as important as it first seems to be.  I’ve always been afraid of visitors not being impressed with my church.  To that end, I’ve obsessed over how clean the carpet is, how good the worship is, whether or not there are any misspellings in the bulletin or the slides, if church members are friendly to the visitors, and any number of similar issues.  It suddenly occurred to me, though, that these worries are completely unfounded.  They are not unfounded in the sense that they don’t happen; they do happen.  But they are unfounded in the sense that they don’t mean much.  If someone rejects my church because there is a misspelling on a worship slide, they would leave my church for any reason.  Keeping such people pleased with everything today merely means they will become displeased about something tomorrow.  There is always the chance they will become displeased about something tomorrow, anyway.  It means such people aren’t and probably never will be in a real relationship with me.  And it is rather silly to worry about losing something that is not a real relationship.

I’m willing to bet there are some things in your life that aren’t that important as you think they are.  I’m willing to bet you are afraid of things that really aren’t as significant as they seem, which really won’t do the damage or aren’t the damage they portend to be.  I don’t know what these are exactly.  They may be like mine.  They may have to do with your reputation or identity in some way, with how people see you or think of you; whether or not they love you/you are loved.  But they could be something else completely.  I don’t know.  I just know we are frightened by things that aren’t really that frightening, and I further know that we won’t be frightened by them anymore if we realize they aren’t as frightening.

If you’d like to hear the entire message this post was taken from, you can find it here.  Enjoy, and may God deliver you from your fears!

2 thoughts on “It’s Not That Important”