I’ve been down with a cold the past two days.  Unable to work, I decided to catch up on some books I have purchased but not read.  One of those was Losers Like Us by Daniel Hochhalter. 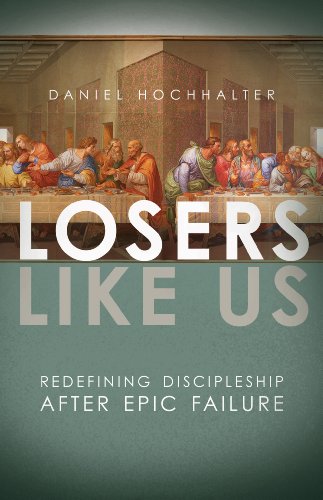 This book was on my Amazon wish list for quite awhile (like so many books, it spent a lot of time on my wish list because I was too cheap to buy it outright).  When I was given a $7 Barnes & Noble credit from some class action suit I was wholly unaware of being in, I finally bought it from them, then converted it through Calibre and put it on my Kindle.

I was attracted to this book for one simple reason: I regard myself as a loser.  I know I’m a loser but I want to do ministry, so a book about losers doing ministry was a no-brainer for me.

I was not disappointed when I finally got around to reading it yesterday.  The book is basically a run-down of Jesus twelve disciples (The Twelve, not counting Matthias or Paul), all of who were losers or at least lacking in one way or another.  Hockhalter not only reveals what these men were lacking, but he also shows how he is lacking that thing as well.  As he puts it, he holds these men in the mirror and sees how he is similar to them.  Along the way, he talks about some of the other ways he has lost in life, including a failure to acquire a PhD.

I liked the book so well I read it in one day (almost one sitting, to be exact).  I thought the author was very brave to share his loser-ness the way he did, and I thought his principle that we are all losers/God uses losers was sound.  I was both convicted and encouraged, and that’s about the best you can ask for.

One particular insight I had as I was reading concerned Jesus’ praying for the twelve on the night before He chose them (Luke 6:12).  I had always figured that Jesus was praying for the ability to chose “the right guys” and that by God’s power He did so.  I see now that there is nothing “right” about these guys, that they weren’t chosen because they were right but right because they were chosen.  I wondered, in fact, if what Jesus was praying for was not the ability to chose correctly but the ability to put up with those who were chosen.  That’s speculation, of course, but the key insight is correct.  There is nothing “right” about these men (except maybe a willingness to follow or a teachable spirit).  And there is nothing “right” about me, either.  I’m not right.  I am a loser.  But I’ve been chosen and can do the work.

I highly recommend this book.  You can get it at Amazon or Barnes & Noble.  There is also a hard copy for you luddites who don’t use ereaders.

I recently had the (probably bad) idea of writing a collection of Halloween-themed short stories.  Hey, everyone else has done it, so I should give it a try to, right?  Right or not, that’s what I did.  I was unsatisfied with many of the Halloween anthologies out there as the stories in them are either way too gory and mean-spirited or don’t have much to do with Halloween at all.  I wanted my short stories to be fully “Halloweenish” and I didn’t want them to be gory at all.  The end result was this work in progress: Upon This Night.

I’ve got the opening, closing, and two of the eight or so planned stories mostly done.  I’d love to have you give them a look and give me some feedback.  How do I get you to do that?  Um…please?  Or maybe trick or treat?