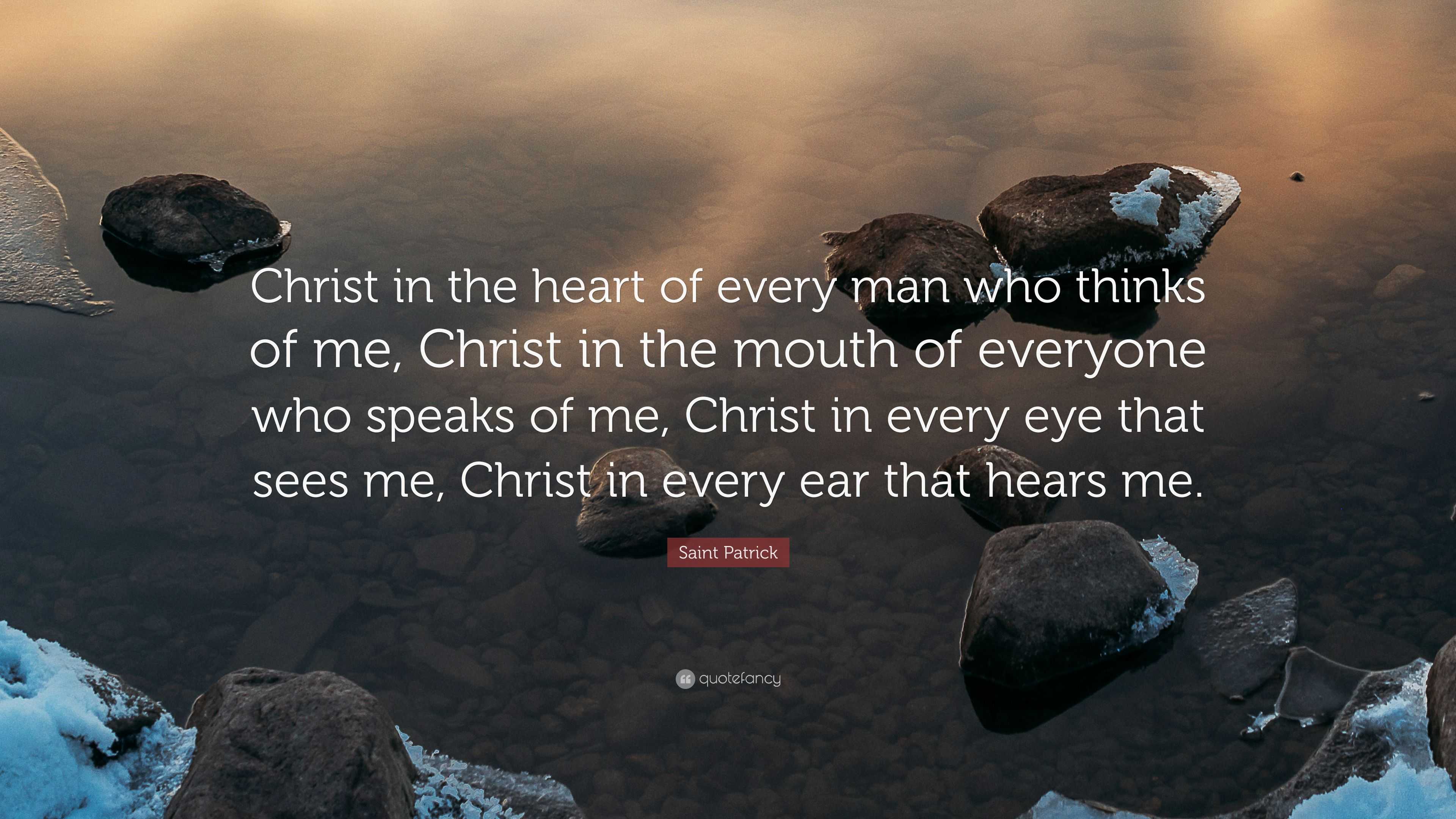 It is the second phrase there which has really caught my attention (though all, of course, are worthy of consideration).  Christ is the mouth of everyone who speaks of me.  I think I heard that phrase/prayer/petition years ago; I vaguely recall encountering St. Patrick’s Breastplate in my college years (though that might be a false memory, a Mandela effect).  But it has exploded across my radar recently.  Some of this is due to the Celtic Daily Office.  I use this office at least twice a week if not more during my own prayer time.  The morning prayer of this office references this statement, saying:

Not only so, but Ransomed Heart’s Daily Prayer, which I also use two or three times a week, mentions something similar:

Somehow I have combined these two or three sources into my own idea, which I phrase in this way: “Be in the mouth of everyone who speaks to me, and be in my mouth every time I speak.”

It is that second part that really convicts me.  The first part is a blessing I’m asking for myself, actually; I’m hoping that everybody who speaks to me does so as Christ, that is, speaks to me in the kind ways Christ would, doesn’t say anything that hurts me (yes, I know Christ challenged people but He never maliciously hurt anyone).  The second part, though, is a responsibility I need to accept.  It is a fair responsibility.  I firmly believe in “What’s good for the goose is good for the gander”; I think I can make the case that is a biblical concept and that we thus shouldn’t ask something for ourselves which we aren’t willing to extend to others.  It is a good or noble responsibility; I’d be pretty honored if I knew that people felt I talked with them like Christ.

But it is also a difficult responsibility.  It goes contrary to my nature.  I think it does, anyway.  I always have a hard time separating nature from nurture.  But it definitely goes against nurture, goes against the way I was trained.  I was trained that you have to speak harshly.  Forget that, “Speak softly but carry a big stick” stuff.  No, speak heavy from the very beginning and don’t let up.  I was trained to believe that anyone who abridges you in word or deed must be immediately and fully smacked down in every way.  I was trained to believe that anyone who sends the slightest shade your way must be lit up hardcore.

Movies were a big part of this training.  In most (if not every) action movie (my favorites), there is scene early on in which someone braces the hero only for the hero to put them in their place.  I could give dozens of example, but my favorite is from the Chuck Norris movie Sidekicks.  Here is not Chuck but Mako who puts a man who braces him in his place (in case you’re wondering, this clip sticks in my mind because I was studying martial arts at the time; in every martial arts movie, the hero does some slight of hand in a situation similar to this, but this is the one in which my eyes were finally opened and I realized, “We’re martial artists, not magicians.  We can’t do stuff like that!”).

(I was totally surprised to find this clip on my first try.  I was also totally surprised at the racial slurs used.  Please remember this movie comes from a different time and that I don’t mean to offend anyone by using it.)

While I’ve never reached Mako’s level of putting people in their place, I have put them in their place nonetheless.  I have at least tried to.  It usually doesn’t work that well for me.  My mind doesn’t tend to insults (which I take as a good thing), and I usually don’t think of what to say to someone who braces me until much later.  I guess I’m like Marge that way:

(If YouTube removes that video, find it here: https://comb.qNnUSrio/)

But what I’ve discovered after reading and praying this phrase/petition, after seeing this incredibly beautiful idea of “speaking Jesus” to people (which is what I believe this is: not just speaking like Jesus but actually speaking Jesus), I am turning away from this training.  I am trying to, anyway.  I’m not sure what or how long it will take to be successful at this.  But I am sure I want to be successful at this.  Christ will not be in the mouth of everyone who speaks to me; that prayer won’t be answered at the one hundred percent level; people are going to brace me.  But Christ can be in my mouth whenever I speak to anyone.  The love of Christ can be all that is between me and everyone to whom I speak.  And I want it to be.  I’m praying for it to be.