Stephen Hawking died this past week.   I was aware of him, and had been for years.  I could probably tell you that he wrote A Brief History of Time.  But I didn’t know that much about him.  In fact, I thought his name was Stephen Hawkins.

I prayed for him when I heard about his death, though.  I do that when I hear about people who die, particularly enemies of The Faith.  I prayed for Christopher Hitchens this way (and truly do regret that he died; I truly am sorry that his life was cut short by a disease).  And I prayed for Stephen Hawking too.  I liked him, actually; I liked his proof against time travel (as you know if you read this post).  So I prayed for him.

Now I don’t have a huge problem with his assertion that he does not believe in “heaven or afterlife”; I’ve heard many people make similar assertions.  What I have a problem with is how he jumps to a conclusion about people who do believe in them.  He says not only is that they are a “fairy tale” (which is  an insulting way to describe someone’s beliefs) but that the only reason people believe in such a fairy tale is that they are “afraid of the dark” (that is, of what will happen to them after death).

And the reason I have a problem with this statement is that it is an unproven (and probably unprovable) generalization.   It is an “all” or “every” statement, which we try to avoid because they are usually false.  It is also a statement based on knowledge Hawking does not have and can not possible have.

Hawking was a smart guy, as I understand it.  He certainly knew a lot of things I don’t know.  But one thing I know that he does not is why I have faith, why I believe Jesus is the Christ, the Son of the Living God.  And it isn’t because I’m afraid of the dark.  It is because I find faith/Jesus/God to be reasonable and supported by multiple streams of evidence.

Here’s a short list of such reason/evidence (one of many I could post and certainly not exhaustive): 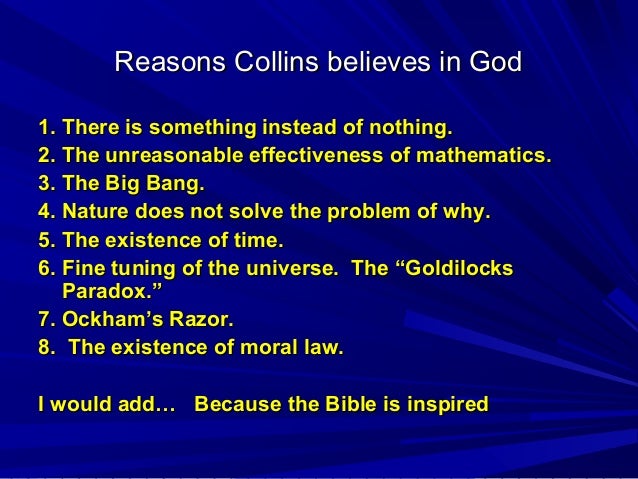 Honestly, I haven’t considered all of these things.  But I have considered a lot of them (particularly moral law) and have come to believe there is a God and Jesus is His Son because of them.  I have not, then, clung desperately to this belief simply because of an infantile fear of the dark or because I was raised to believe (the subject of another post) or any of these other things that non-believers accuse me of.  I have thought my beliefs out.  I have investigated them.  I have come to conclusions about them.  Just because I came to a different conclusion than you did doesn’t mean I didn’t do those things.  So please, all you intelligent atheists out there, please stop saying I didn’t.  Why I believe really is something you don’t know and can’t possibly know, and making general statements about what you don’t and can’t possibly know is not intelligent.